Articles, interviews, trailers and other media bits and bites.

Lindsay Wagner Is On Fire

Lindsay Wagner is cast (some say typecast) as Billy Ikehorn, the imperious yet vulnerable and richly libidinous heroine of CBS’ three-night miniseries Scruples. 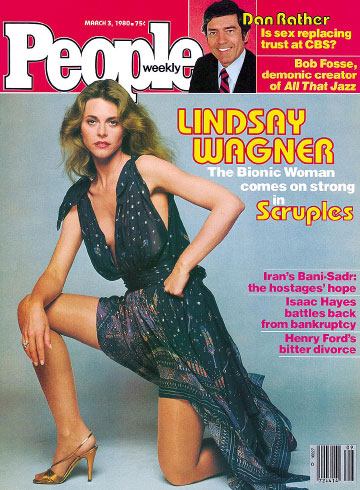 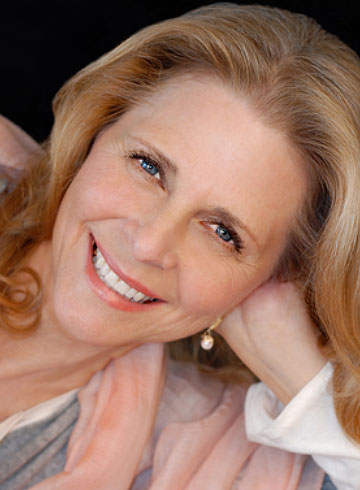 From The Bionic Woman to
the Quiet-Minded and Openhearted

Felicia Marie Tomasko: Your commitment to growth has been a lifelong area of study. How did that begin? Lindsay Wagner rose to prominence in the hearts and attention of television audiences in her Emmy Award-winning portrayal of Jaime Sommers in “The Bionic Woman”.

From The Bionic Woman to
the Quiet-Minded and Openhearted

Felicia Marie Tomasko: Your commitment to growth has been a lifelong area of study. How did that begin? Lindsay Wagner rose to prominence in the hearts and attention of television audiences in her Emmy Award-winning portrayal of Jaime Sommers in “The Bionic Woman”. She went on to make more than 40 TV movies, five mini-series and 12 feature films, and she continues to appear in cameos. Along with her on-screen appearances, she has a vivid interest in the advancement of human potential and has always used her voice to champion transformation and holistic healing of mind, body, and soul. In addition to co-authoring a vegetarian cookbook and other lifestyle titles, she is a lifelong advocate for helping people heal from domestic violence and child abuse and she has a passion for environmental protection. For the past six years, she has been teaching workshops designed to help people see how to overcome their personal challenges.

Lindsay Wagner: By the time I was 19, I had a severe case of ulcers and gallbladder problems and the doctors at UCLA were suggesting surgery. My boyfriend’s mother was the personal secretary of Dr. Hornaday, who was the co-founder of the Church of Religious Science with the late Ernest Holmes (now called Centers for Spiritual Living). Dr. Hornaday helped me go through a healing process that allowed me to avoid the surgery. I was blown away by the discovery that there was a lot we were not learning in the mainstream. I was driven by how I felt after learning meditation, visualization, self-investigation and combining this with prayer. I was learning to connect much more deeply and consciously on a spiritual level. I was observing my mind and saw how my thinking processes and the flow of the life force coming through me, resulted in physical, mental and emotional health or ill-health depending on my perspective. In 1969, I became an avid student of the integration of body, mind, and spirit for health and healing; it was my passion. Sometimes people in the entertainment industry would say, “Yeah, she just works here.” Then there was the rest of growing up, starting relationships and my career. All of a sudden I was a global icon and that had its challenges. There was no lack of stimulation for growth.

In my life, I’ve been blessed with amazing teachers. Any time I would ask the divine to send me someone or something, a book, person, or workshop would come. I even nearly quit acting for a while to become a holistic practitioner; I studied homeopathy and helped promote the American Holistic Medical Association, who got in touch with me because of the film, “The Incredible Journey of Doctor Meg Laurel”, my first television movie after “The Bionic Woman”. I had worked with the writers on expanding an eight-page treatment into a dramatic metaphor about what was happening in our culture between naturopaths and allopaths on opposite ends of the spectrum. There was a feeling as though never the twain shall meet. This was heartbreaking to me because there are wonderful things on both ends and we need them all.

FMT: It sounds like this project was more than just a film for you, that it was a way of delivering a specific message and a means by which you could unite your acting work with your interests in holistic health.

LW: What always interested me about film and television is the ability to tell a story that would not only entertain but possibly help someone. For me the passion is communication. I am grateful for the good fortune to have the power to choose my projects and work with the scripts to enhance the potency of the issues being explored in the film. I was involved in so many true stories because I love it when people transcend their circumstances and are growing rather than just surviving.

FMT: Even the role for which you became known (The Bionic Woman) was about a person who transcended her circumstances.

LW: In that situation, I was challenging the writers and producers to go deeper with the stories beyond the typical black and white, good and bad cop in a skirt. I was happy because everyone loved the challenges of trying to make complex stories work within the formula of the series, even when we were under the gun because we were the cutting edge technology at the time, with a lot of stunts and usually only one camera. Our workdays were sometimes 16 or 18 hours.

FMT: Seeing strong women on television showed human potential and how we find our inner strength. It seems as though you were able to find a way to bring your different interests together.

LW: It was karmic. In television, they let me try things; they saw that the public liked them, so we had the opportunity to make movies on all sorts of topics which, up until then, were “too controversial for TV”. It was an interesting time in history.

FMT: That time of history has influenced many people today.

LW: It was a cultural revolution; it was the time of the women’s movement but it wasn’t just about women, it was about bringing up more feminine consciousness in our culture, seeing life situations from a different perspective, looking at other ways of problem-solving beyond just winning. I was glad I had the opportunity to be part of that. It was an interesting time.

FMT: What has inspired you to step into this role of teaching workshops?

LW: It feels like a natural transition. I’ve always been communicating my ideas through story and now I’m just doing it more overtly, and that was a big challenge for me at first. At one point, I took some time off, gave myself time to go more deeply into my spiritual studies and traveled with my kids. Two years later, a friend who was running a program in the LA County Jail called “Bridges to Recovery” (for domestic violence offenders), invited me to see what she and her team had developed since she knew I had been involved in public education related to domestic violence and had done the movie “Shattered Dreams”, about a woman who transcended her circumstances rather than continuing to see herself as just a victim. My family had struggled with domestic violence and getting over the effects of that was part of my own healing journey. I thought I would visit for 20 minutes, but stayed all day and cried my eyes out, seeing 60 men having the passion and courage to look at themselves, learn and grow in this amazing program.

It was compassionate and nonjudgmental, designed to empower people to take full responsibility for their actions, explore their conditioning, attitudes and habits and learn true forgiveness for self and others. They emphasized the fact that we have the ability to grow out of patterns that don’t serve our life, regardless of what they are or what we’ve done in the past.
I became deeply involved with the program for six years and co-founded a support group with one of the teachers for the alumni of BTR. Our goal was to give them and their families a safe place to continue to grow individually and together. One of the techniques we used was Emotional Freedom Technique (EFT), extremely helpful in releasing emotional charge that won’t let you move forward. I also shared the Oneness Blessing (Deeksha), a flow of energy that balances the energy of the body and has the capacity to quiet the mind and open the heart.

We all fight about the same things; it’s just that some people don’t have a safety switch. We unravel what is blocking the safety switch. We all have self-esteem issues, so much of the same pain and anger. People who would come to observe the support group would say, “Oh, I need to take that program,” and would ask me when we would do one for the public, so I started doing small programs in my house that grew by word of mouth. Then someone invited me to do a workshop in another state and it just became viral. In the past five years, I’ve been to at least six other countries. Lately, though, I’ve found myself becoming genuinely interested in going back to the film industry. I have some stories I’ve been carrying around for a few years now that I’d like to get made.
I’ve done a few guest appearances on the sci-fi show “Warehouse 13” recently, where I play the warehouse doctor and am actually doing some of the EFT tapping as treatment for the characters’ pain. Anybody who knows EFT would have giggled if they had seen the show. There I am planting seeds.

FMT: What is it that you hope to communicate with your work in all areas?

LW: That we are all more amazing than we know. My prayer is that in one form or another something sparks that awakening in people along with the awareness that we are all connected at a very profound level. When we see and experience ourselves as so separate from everything, we limit our ability to bring through the life force or to draw in what we need for our happiness. Once we have a sense that we are a unique expression of the whole then there is an experiential knowing that the power that is driving it all is accessible to us. That power implies joy and peace and creativity.

Lindsay has released her first meditation CD, “Open to Oneness”, which incorporates the Oneness Blessing. She teaches “Quiet the Mind & Open the Heart” workshops around the world, including an upcoming workshop August 12-14 in Palm Springs, CA.

WOMEN who start out in television as glamour girls – and that includes everyone from Farah Fawcett-Majors in ”Charlie’s Angels” to Lynda Carter in ”Wonder Woman” – generally find that creating a more substantial professional image can be frustrating. 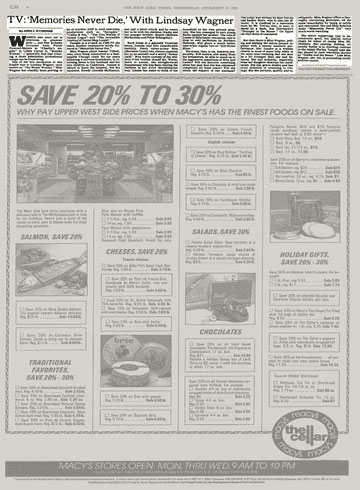 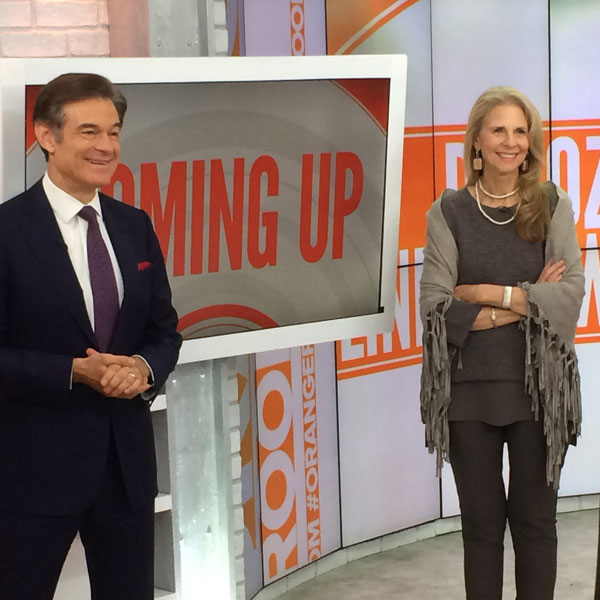 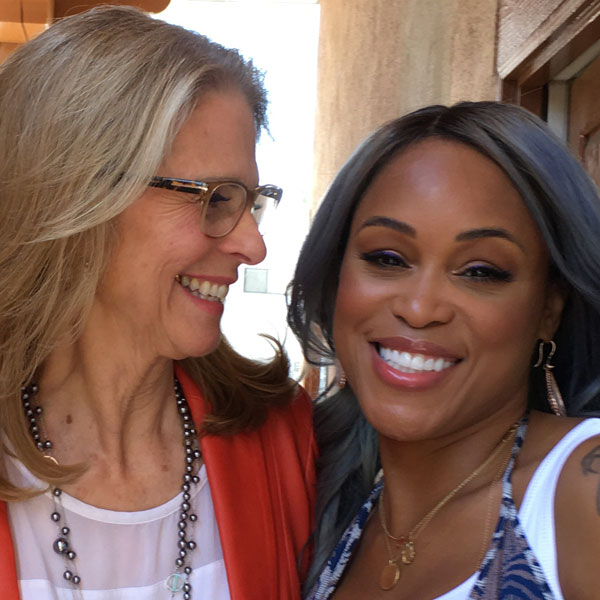